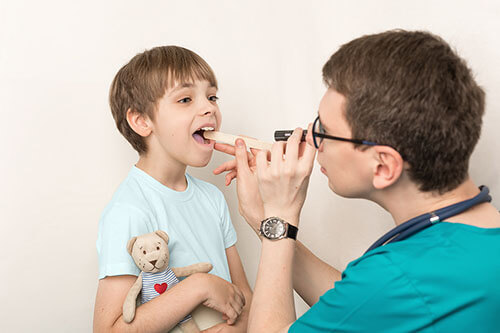 How long does it take to get a strep test result?

Our Rapid Molecular Strep Test typically returns results in 6 minutes or less. A simple swab of the throat is all that is needed.

What happens if Strep Throat is not treated?

When strep throat is not treated properly it can cause multiple complications, such as kidney inflammation and/or rheumatic fever. Rheumatic fever can cause inflamed and painful joints, a specific type of rash, and possibly heart valve damage.

What is Strep Throat?

Strep throat is an infection in the throat and tonsils caused by bacteria called group A Streptococcus (group A strep).

What are the symptoms of strep throat?

Who can get a Strep Throat infections?

Strep throat is most common in children, but it affects people of all ages. If you or your child has signs or symptoms of strep throat, AFC Urgent Care offers prompt testing and treatment

How accurate is your strep throat test?

Rapid Molecular Strep Testing is not only fast but it is extremely accurate. Our test will correctly identify patients with a strep infection, 98.5% of the time. However, when talking about accuracy of any strep test, you have to take into consideration two factors: Sensitivity and Specificity.

Why is it important to get a quick and accurate strep diagnosis?

Our medical providers treat strep throat with antibiotics and will typically allow you to return to work or school the following day.  In most cases, you’ll start feeling better more quickly when prescribed antibiotics for strep throat and it will prevent you from spreading it to other people.

What does Sensitivity and Specificity mean?

Sensitivity measures how often a test correctly generates a positive result for people who have the condition that’s being tested for (also known as the “true positive” rate). A test that is highly sensitive will not generate many false-negative results and identify almost anybody who has the disease.

Specificity measures a test’s ability to correctly generate a negative result for people who don’t have the condition that’s being tested for (also known as the “true negative” rate). A test with a high-specificity will correctly rule out almost everyone who doesn’t have the disease and won’t generate many false-positive results.

Our strep testing has a 98.5% sensitivity for and 93.4% specificity for detecting group A strep.  This means on average; our test will generate a false negative 1.5% of the time and a false positive 6.6% of the time. This is based on testing performed by the manufacturer of our equipment, Abbott Labs.